This poster was produced for my second election campaign for the Belfast South constituency in the Northern Ireland Assembly in 2011. 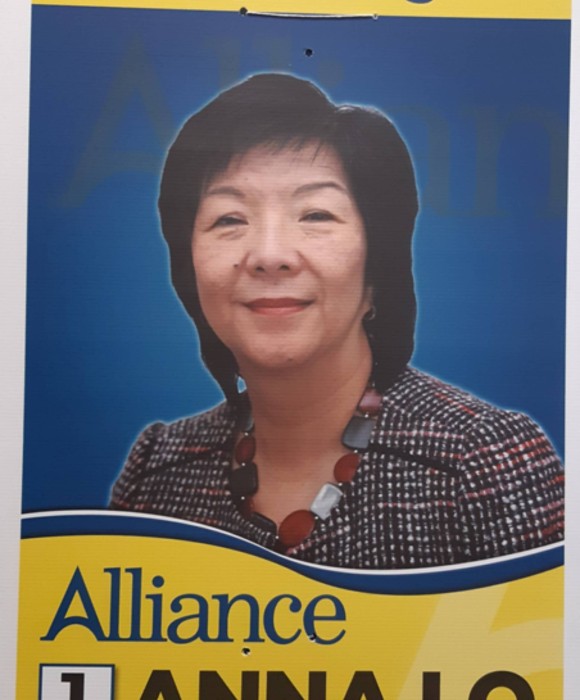 I like this poster best amongst all the three Alliance Party posters made for me for elections for the Assembly and the European Parliament.  It was a strange feeling initially seeing your portrait staring down at you high up from a lamp post. Mind you, after a while, you just got used to them, driving from street to street and you hardly noticed them anymore.  Canvassing is hard work, pounding the pavements with a clipboard and a bundle of leaflets to knock on as many doors as humanly possible day and night for weeks but it was gratifying to get the opportunity to engage with the constituents on issues they are interested in or concerned with.

However, the posters must have done something to help my canvassing as I topped the poll in that election and kept my seat for another term of five years to serve my constituents in South Belfast. It was my absolute privilege to represent the very culturally diverse people in that most cosmopolitan city in Northern Ireland.

People have often wondered how and why I plunged into the complex world of politics in Northern Ireland as an outsider, born far away, and not a Christian with no natural affiliation for many of the traditional unionist or nationalist parties. The answer to the ‘how’ is simple: I was asked! The Alliance Party was looking for a candidate and approached me the day before their party candidate nomination closed.  I sometimes joke that had I got more time to ponder, I might have declined their kind invitation!

But seriously, I was delighted to get the chance to test out if people in Northern Ireland would vote for a person from a minority background clearly with no axe to grind for either side of the political divide.  As I had known a number of politicians through my connections with political journalists and the BBC as well as lobbying for racial equality law and policies, I thought perhaps it was about time to get into government to make decisions rather than trying to convince politicians to do what we, from the voluntary sector, ask them to implement.

Furthermore, there was, at that time, a sense of optimism in the air that after four and a half years of suspension of the Assembly that Northern Ireland was changing for the better – that politics would be less tribal and more focused on bread and butter issues.  I wanted to be part of that change.

After weeks in the bitterly cold months of the campaign trail, I was glad to see polling finally took place on 7 March 2007. Counting started the next day in the King’s Hall and the atmosphere there was electric – full of tension, excitement and anticipation amongst candidates and party supporters.  The local, national and even foreign media were out in force to report on the new attempt to revive power-sharing in this divided country.

I was a bit run down towards the end of the canvassing and was suffering from a bout of flu on the day of the count. Not having been to the counting venue, I was not sure how cold the cavernous King’s Hall would be, so on that morning, I pulled out an old woollen jumper with a turtle neck to keep me warm.  I later noticed in the washroom that I had put it on back to front but thought it was fine and would at least keep my neck and chest warm. When I broke history to become the first non-white elected politician in Northern Ireland and more astonishingly, the first China-born parliamentarian in Europe, there was inevitably great media interest on me.  The day I was most photographed in my life, I had my jumper the wrong way round covering not just my neck but also my chin as the many photographs showed!

I was pleased that my debut in politics had sent out a positive message to the world.  Northern Ireland had not only entered a new era of a coalition government but also, by electing me against all the odds, demonstrated that people in Northern Ireland were willing to embrace diversity.  It was evidence that we were not as bigoted as the outside world had, at times, made us out to be.  Only a short time before, a Guardian journalist had labelled us ‘the race-hate capital of Europe’.

I have enjoyed my nine years of politics in Northern Ireland and would encourage anyone, particularly women, young people, black and minority ethnic people to participate in politics to get their voices heard.