Charabanc at the Winter Palace Square 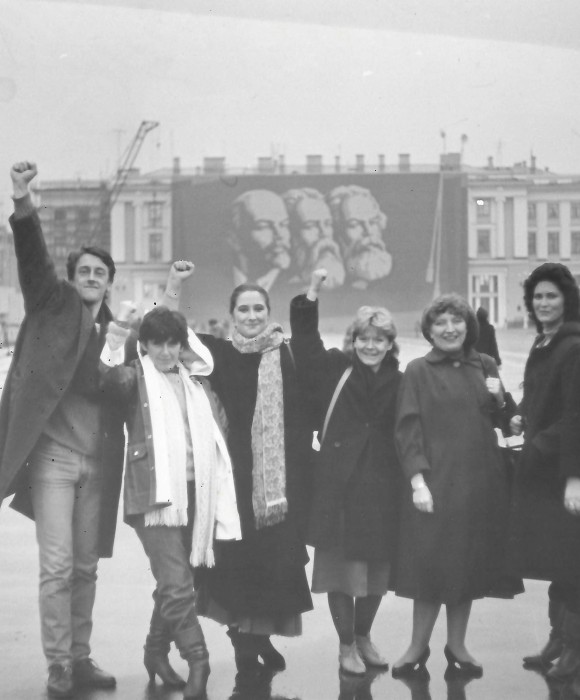 My memories are based on a company photograph taken by Louis Edmondson in Winter Palace Square, St. Petersburg, Russia. It includes the five founder members, actor Aidan McCann and the director of Lay Up Your Ends, Pam Brighton. All these years later, I see a journey of female empowerment. When the company closed in 1995, each of the founders before and after that date, went on to carve very successful careers in the creative industries.

Charabanc Theatre Company was unofficially formed in 1982 by a group of female actors; the core company being Marie Jones, Eleanor Methven, Brenda Winter-Palmer, Maureen Macauley and myself, Carol Moore. With no permanent independent theatre scene back then, we were increasingly frustrated by the lack of challenging female roles. Between the autumn of 1982 and the opening of our first play Lay Up Your Ends in May 1983, and encouraged by playwright, Martin Lynch, we had researched a hundred years of Belfast history. Much of that research was done in the Linen Hall Library.

The research eventually led us to a tiny newspaper story of a mill girl’s strike in 1911, which began at York Street Mill and spread across the city. Belfast was the biggest manufacturer of linen in the world and employed thousands of women and men. Young girls around 14 began in the mills as doffers, removing the full bobbins of linen thread and replacing them with empty ones. Conditions were dreadful, the women often bare-footed and angle deep in water. At York Street Mill, a system of fines was also being introduced for any person found away from their usual place of work, except for necessary purposes and for talking or singing. The mill girls had had enough and although many were not part of a union, they decided to go on strike and seek the help of Mr James Connolly.

The subject matter had connected us to our own city’s history and through the writing process we collectively found a voice.  Martin Lynch was hugely influential in encouraging us to write a new play. As part of our research we conducted oral interviews with former mill girls, which was a unique way of working at the time. Not only did it create a methodology for collecting stories, but we also were giving working-class women a voice. The following year, audiences across the whole of Ireland would see the first touring production of Charabanc Theatre Company to theatres, but just as importantly, also to many community venues, far away from the traditional theatre touring circuit.

Lay Up Your Ends, written by Martin Lynch and Charabanc Theatre Company, toured off and on for the next two years, including being invited to both the Dublin Theatre Festival and Mayfest (Glasgow). Pam Brighton, a member of the British/Soviet Friendship Society, came up with the inspired idea to try and get the company to the Soviet Union and roped in another member, John Russell, to help us organise it. I don’t remember much of the logistics, but huge credit goes to them, and to actor and Charabanc Company Director, Ian McElhinney, and Charabanc’s Administrator, Janet Mackle. It seemed that a chartered flight was going to be cheaper if we found friends and family who fancied nine days and nights in the USSR. The word went out. They included Louis Edmondson and Judith Elliot from the BBC, Jeanie Johnston, Kate Smith and Joanne Woods from UTV, Eugene Moloney (Irish News) sadly no longer with us, my mum and aunt and many more. In effect they were subsidising the company’s trip and without them, we probably couldn’t have gone.

A Belfast theatre company were going to the Soviet Union! What other theatre company could say that in the eighties and in hindsight of course it would have made a brilliant television documentary.  The trip would take us to Moscow, Leningrad (now known as St Petersburg) and Vilnius in Lithuania. The company would perform in two of the cities, but for the most part, it was simply a wonderful cultural exchange and life-altering experience.

Now, the Soviet authorities in their wisdom saw the company as ‘workers’. We would stay in traditional Russian hotels, were given an exhausting itinerary and our meals were pre-booked. Martin Lynch coined us the ‘A’ team, with himself and the rest of the so-called ‘tourists’ the ‘B’ team or the ‘Lynch mob’. They would stay in tourist hotels, have a different guide and itinerary, and only saw us on the two over-night train journeys, the Kirov Ballet and the last night party. As a taster of what those train journeys were like, you will not be surprised to know we liked the odd alcoholic beverage or two. So much so that the train eventually ran out of alcohol. I know! What a disaster! With either luck or charm or both, a female guard eventually arrived with beer and the party continued well into the small hours. We were so noisy, a guard informed us that the least we could do was be quiet going through the small towns, otherwise someone might report the noise to the authorities.

We had two days in Moscow and performed several scenes from the play, at what is now ‘The Russian University of Theatre Arts’ and one of the largest and oldest independent theatrical arts school in Russia. The streets were vast, the buildings titanic (excuse the pun) and you would only recognise a shop by possibly seeing a row of cabbages outside. In Leningrad at Friendship House, we performed Lay Up Your Ends and were somewhat bemused when we returned in Act 2 to find a large proportion of the audience had left. Apparently, they were students studying English and couldn’t decipher anything approaching the English language in our broad Belfast accents. We visited the Winter Palace, built as a home for the Emperor and which now forms part of the Hermitage Museum. The storming of the palace in 1917 would become an iconic symbol of the Russian Revolution.  The company actually sat in the Royal Box of the Kirov ballet and as we promenaded during the interval, holding our glasses of champagne, two Americans recognised us, having seen the production in Sligo. Vilnius was equally beautiful and on leaving a stunning three-hour play ‘A Day Can Last One Hundred Years’ lasting 3 hours, there were people outside pleading to buy tickets, because theatre was so affordable and popular.

Every person on that trip came back with uniquely personal and funny stories about their Soviet Union trip. Only 7 years later the communist system had collapsed.