The legacy of the Northern Ireland Women’s Coalition

Danielle Roberts is Policy and Development Officer for Here NI. In this blog, she explores the legacy of the Northern Ireland Women’s Coalition. Danielle recalls how seeing a poster in the Linen Hall Library’s Vertical Gallery reminded her of the commitment these women had to making Northern Ireland a more equal place.

"Some of my favourite things I’ve come across are the anecdotes about how these women were so creative and clever with their limited resources. Their first posters were on cardboard covered with cling film, later they used re-purposed referendum posters-which they retrieved by shimmying up lampposts!" 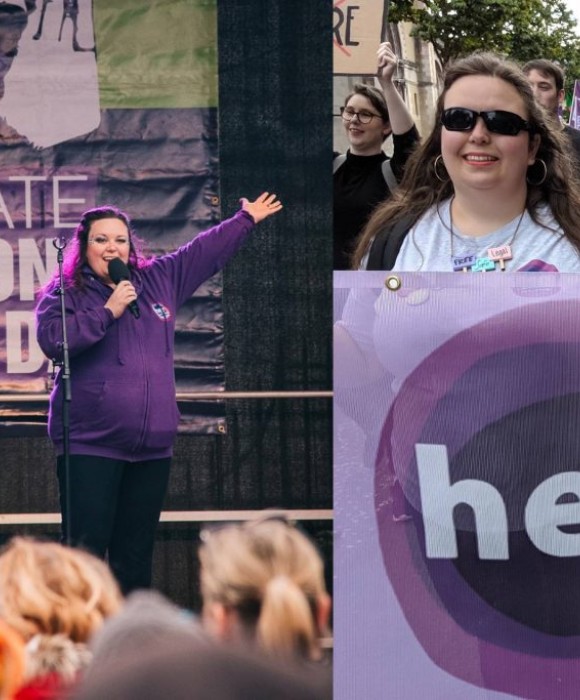 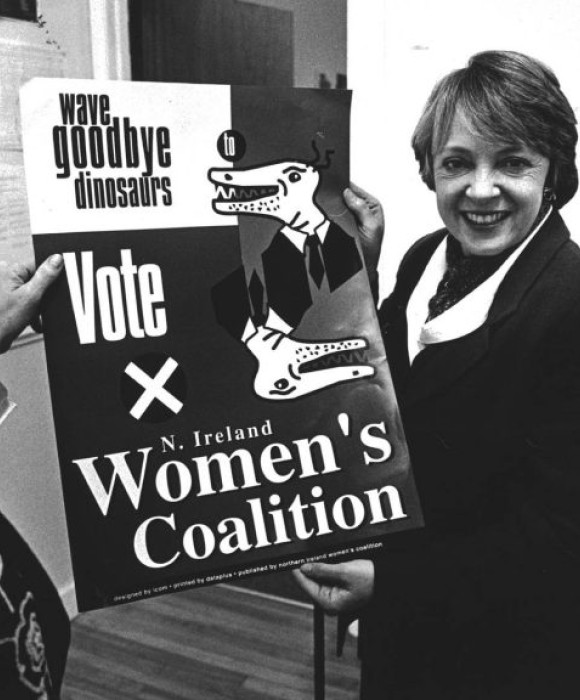 When I think of the Linen Hall Library collections the first thing that comes to mind is the Northern Ireland Women’s Coalition (NIWC) poster as part of the exhibition going up the stairs. It’s in the feminist colours of purple, green and white with illustrations of dinosaurs wearing suits and says ‘Wave goodbye to dinosaurs’ while encouraging a vote for the NIWC. As part of my PhD research on barriers to Protestant Unionist Loyalist women’s political participation I have read a lot about the NIWC, some of my favourite things I’ve come across are the anecdotes about how these women were so creative and clever with their limited resources. Their first posters were on cardboard covered with cling film, later they used re-purposed referendum posters – which they retrieved by shimmying up lampposts!

NIWC members negotiated with Mo Mowlam in the ladies loos over a menthol cigarette, and met loyalist prisoners in prison portacabins, as well as bringing politics to the school gate. Operating on 3 key principles of inclusion, human rights and equality the NIWC contributed significantly to the content of the Belfast Agreement as well as bringing together a diverse range of women, in what was an incredibly difficult and hostile context. So many of the women who made up the NIWC are still active in the women’s sector, community organisations, academia and formal politics; contributing to civic society and engaging with institutions. While the NIWC is now disbanded, we must remember their contribution to the talks, and Agreement. The Civic Forum (now defunct) was championed by the NIWC as a way to include the voices of civil society, and also as an avenue to increase the level of women’s participation. The NIWC advocated for a proportional electoral system, although ultimately they ended up compromising on their preferred model of top up seats. They also secured the inclusion of a commitment to support women’s full and equal participation in society as part of the Agreement. I’m lucky to have the opportunity to work with and learn from these extraordinary women in my role as Policy Development Officer at Here NI.