Award-winning playwright, essayist, and short story specialist, Rosemary Jenkinson allows us to peep behind the doors of a writer’s life through humour’s glasses.

The process of ‘becoming’ a writer doesn’t happen overnight, in this blog Jenkinson highlights pathways usually taken and doesn’t gloss over the hardships that can be encountered. Highlighting the need for more female voices she urges women ‘to back each other’s writing’.

Firstly, I should be dead. To start your archive while you’re still alive seems strange, as essentially you’re preparing your own memorial. With that in mind, it’s fitting for my archive to arrive in the Linen Hall Library in the year of covid when the arts themselves are virtually moribund.

As far as I’ve read, an archive is supposed to reveal a writer’s editing process, but if I’d kept all my scored-out versions of manuscripts, I’d need an entire mausoleum to house them. I’ve kept some drafts, however, to show that it takes souciance to write as insouciantly as I do. An archive should also uncover how a writer makes a living (or doesn’t), so I’ve added a few dole letters to paint the impecunious picture.

There was a recent letter doing the rounds on Facebook from an employer of Brendan Behan about how terrible he was at his job as a decorator and I’ve included a similar assessment I received as an admin assistant. It just goes to show that writers are unbiddable, anti-authoritarian and should never be allowed anywhere near conventional employment! The lacunae in a modern writer’s archive are deliciously bitchy letters about other writers or the scatological sex letters like those between Joyce and Nora Barnacle, but I’m happy to give the Linen Hall Library the password to my Tinder account when I’m done with it! 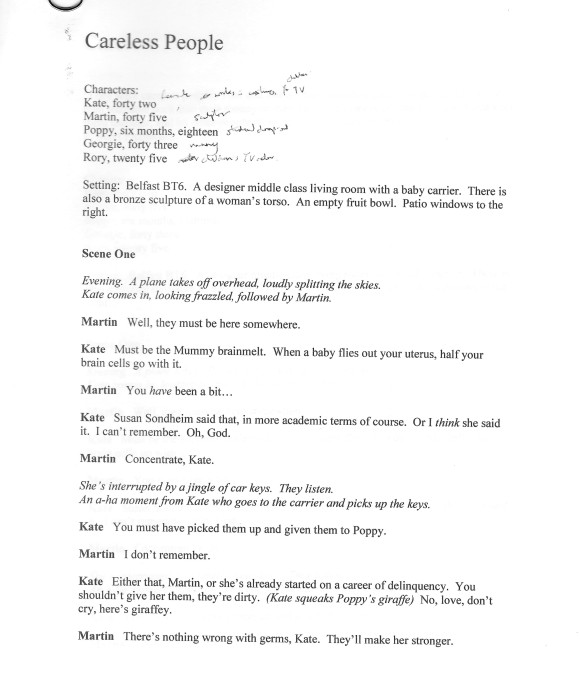 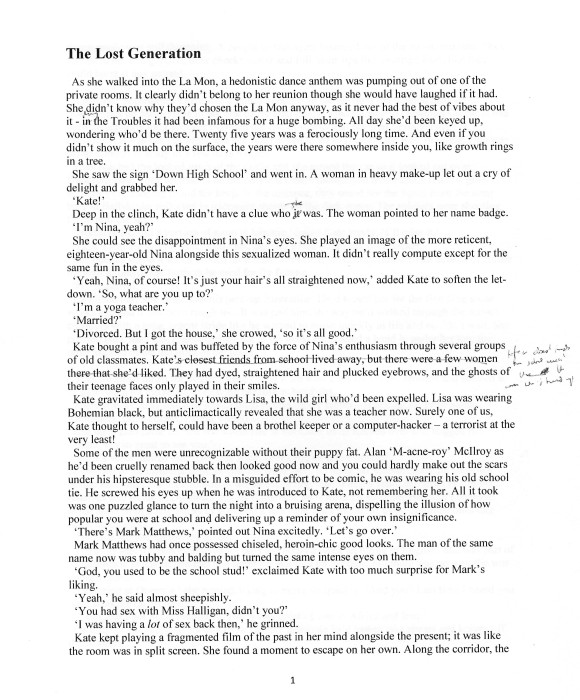 When it comes to play programmes, I’m not remotely sentimental and prefer to collate events in my memory than on my shelves, but there are a few cool ones I’ve kept like A Midsummer Night’s Riot at The Keegan in Washington DC.

One thing the archive demonstrates is the gradual progression from my first plays fifteen years ago when most of my characters were male into writing more roles for women. Prior to the Waking the Feminists movement in 2016, there was much less chance of a production for female-centred plays. There is still a massive over-representation of the male voice to this day, but at least we are closer to parity.

As for books, one of the issues is the big drive to recruit new young female writers, as if male publishers have decided there simply are no current women writers. Part of me wonders if promoting young sexy solipsistic female writers is a form of male revenge on those of us who were spearheading feminist movements, as it’s a way to support a less dangerous brand of feminism while cutting us activists out of history.

Women still need to back each other’s writing. I have great memories of being a prize-winner at the Linen Hall Library in 2003 when Marie Jones was judge of the Brian Moore Short Story Award. She said publicly that my writing was brave and I should continue. It meant a great deal at that time to be encouraged.

In the UK and Ireland, things are better for female writers than when I arrived back in Belfast in 2002, but we will only truly have arrived if some of us are mentioned in the same breath as the Irish greats. At the launch of the 2019 Jaipur Literature Festival in Belfast, Gandhi’s granddaughter, Tara, spoke of Oscar Wilde, George Bernard Shaw, W.B. Yeats, Seamus Heaney and Bobby Sands (gulp!). Once we breach the male inner cabal, we’ll know we’ve made it.

The great thing about having your own archive is that you can see the development in substance and style. I started in short stories, then moved to plays, then moved to memoir – changing genres is like trying to win world titles in different weight classes. Writers need to be protean shapeshifters to survive in a world that worships the new.

It’s also important for any archive to include unpublished work. Kafka ordered his manuscripts to be destroyed after his death, but fortunately they were preserved and later published. Most writers crave immortality but none of us know if we’ll be championed after our death or even if we’ll be culture-cancelled. Normal Mailer, for example, predicted that he and Gore Vidal would become cults while Vidal retorted that he wanted to be a religion. I’d be quite happy to become a philosophy myself!