Lynda Walker, women’s rights and civil rights activist, talks about the power of song to inspire, and the impact that the International Women’s Day Concert Belfast, 1981, had on the development of NI women’s centres and campaigns. 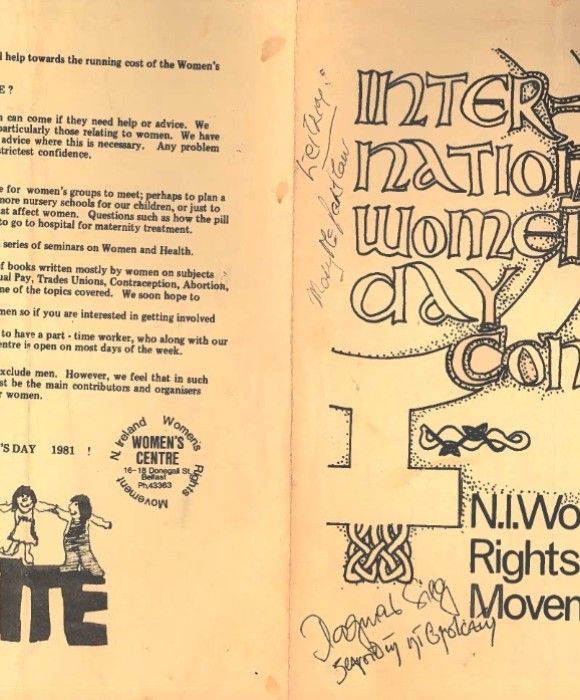 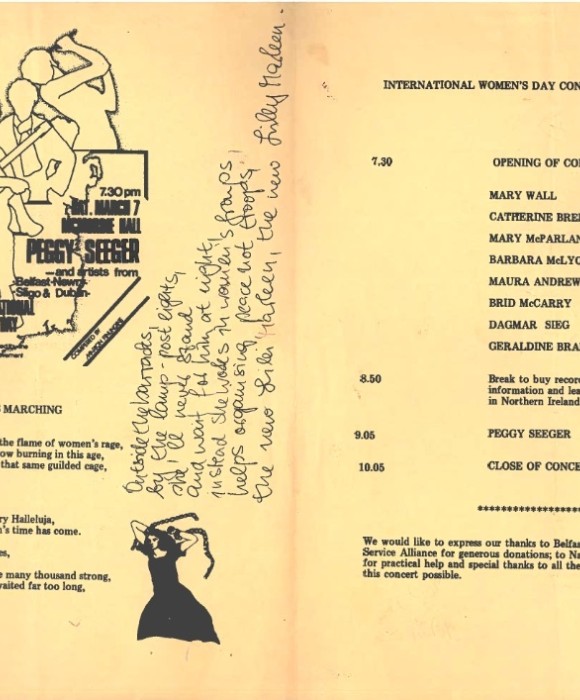 I recollect being in the newly opened Belfast Women’s Centre in Donegall Street with some members of the Northern Ireland Women’s Rights Movement (NIWRM). We were planning for International Women’s Day. I suggested that we have a concert with all women artists with the audience open to everyone.

The programme for the concert was designed by Una Campbell. It contains the signatures of some of the artists who performed in the first all women artist concert organised by the NIWRM which took place on 7th March, 1981, in Queen’s Student’s Union. This was a memorable occasion because we managed to get singers from Dublin, Sligo, Leitrim, and Bessbrook. They were Brid McGarry, Maura Andrews, Mary Wall, Barbara McGlyn, Mary McPartland, Catherine (Bree) McConville, Geraldine Bradley, and Dagmar Seig, from Newry/Dusseldorf. Marian Finucane from RTÉ/Dublin compéred the event. In addition to the Irish singers, we had Peggy Seeger, renowned for writing political and folk songs, a number of which had a feminist perspective. Peggy also brought her son who accompanied her on stage. Brian Green did the sound system.

They sang feminist songs, folk songs and others with an international political message. Peggy Seeger sang I was going to be an Engineer. Coming from Sheffield it was a song that I always identified with. Maura sang Yeat’s poem, Wandering Aengus and Mary Wall contributed with Don’t Get Married Girls.

One verse of a song that stayed with me for years because it relates to peace was sung by Dagmar Sieg:

I contacted Geraldine Bradley and Catherine McConville about their memories of the evening: Geraldine said:

“If you remember I sang Angela Davis and Dagmar sang a song, some of the words went:

Black boy in Chicago, playing in the street. not near enough to wear

Not near enough to eat, don’t you know he saw it, on a July afternoon

Dagmar actually changed the last line to They watched a woman named Eve walk upon the earth, she learnt the song from the Sands family.” Geraldine was nineteen then and she remembers with astonishment and sheer inspiration at all these women singers and musicians, who were strongly and passionately expressing themselves about issues that mattered to our lives. “The buzz was incredible off stage. I met women that evening who were to be my friends for many years after, I felt strengthened in this company and excited and proud to be a woman.”

I asked Catherine McConville about the songs that she, Barbara, and Mary sang. She recalled singing Amelia Earhart, The Union Maid, Wild Mountain Thyme, The High Walls of Derry, Black is the Colour, Victor Jara, Nobody Loves You when you’re Down and Out, Sliabh Gallion Brae (some solo, some together) and said:

“It was an honour to be asked to sing at that incredible concert in the Mandela Hall. I remember standing there on stage in front of that amazing audience and understanding for the first time the power of song to change the world.”

Catherine was among a number of these singers who returned to Belfast to perform in following years International Women’s Day concerts.

The money from the event went to the newly opened NIWRM Women’s Centre, the first in the North, established in 1979. The centre provided a catalyst for other women’s groups, such as Belfast Rape Crisis Centre, NI Abortion Campaign, the Women’s Education Project, and others. It was to inspire the creation of the Falls, Shankill Women’s Centres, and other centres which opened in the 1980s.

In 1975, the NIWRM had the grand idea of uniting women under one umbrella, but the political situation was not conducive to such aspirations, though we got the support of many women and trades unions. We also affiliated to the anti-imperialist Women’s International Democratic Federation (WIDF), with links to women throughout the world, and in 1987 we took an all-Ireland delegation of 42 women to the World Congress of Women in Moscow organised by the WIDF. We also carried out research into sex discrimination in schools, hairdressing apprenticeships, child care, contract cleaners, and Who’s Making the News: Women in the Media industry and we lit the torch for International Women’s Day-every year. I like to think that we were instrumental in helping to create the strength that exists now in the women’s movement here.

* To Catherine McConville and Geraldine Bradley: Thanks for the memories

Lynda Walker continues to elevate women in society. Alongside Dr Margaret Ward and Dr Myrtle Hill, Lynda produced the NLHF project A Century of Women, more on that project can be found here www.acenturyofwomen.com/