‘[There’s a] constant bleaching out of women’s history so that it all has to be discovered again.’* 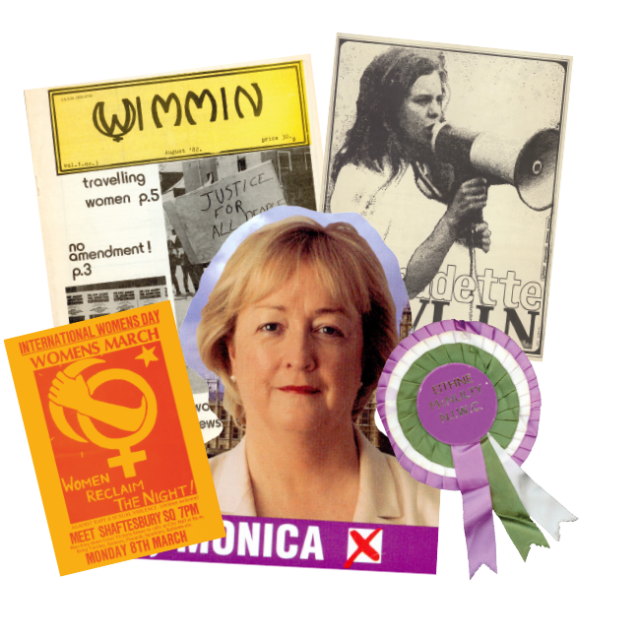 During this period, women across Northern Ireland reached out to each other to action their shared vision of a better future for all. extraORDINARYwomen participants articulated feelings of frustration at being invisible: in the history books; in creative and political life; in activism; and in the workplace.

They discussed how by feeling more empowered to speak out they began campaigning for improvements for their communities, becoming catalysts for change. This consolidation of skills and strength ensured that the collective women’s voice gained momentum.

Fear and indifference were replaced by empowerment and a shared hunger for change. The birth of support networks, women’s centres, and initiatives such as International Women’s Day, laid the pathway for what followed; while campaigns for education, employment, and equal rights led to the formation of collectives and groups.

Women took the lead on many fronts, including entering mainstream politics. extraORDINARYwomen participants highlighted Inez McCormack, Betty Sinclair, May Blood, Lynda Edgerton Walker, and Monica McWilliams as important figures in their narratives. Grassroots campaigns for quality-of-life improvements which were led by women were praised for their community impact. Examples cited included Avila Kilmurray and Cathy Harkin setting up Women’s Aid in Derry/Londonderry in the 1970s; the 1971 lobbying of Belfast City Council by Lynda Edgerton Walker to make milk freely available in schools; and in 1984 when women spoke out against the ‘pram ban’ from shops and campaigned for toilet facilities when shopping with young children.

Beginning in the 1970s, International Women’s Day was lauded as a day belonging to women to celebrate their personal and shared journeys of the past, present, and future.